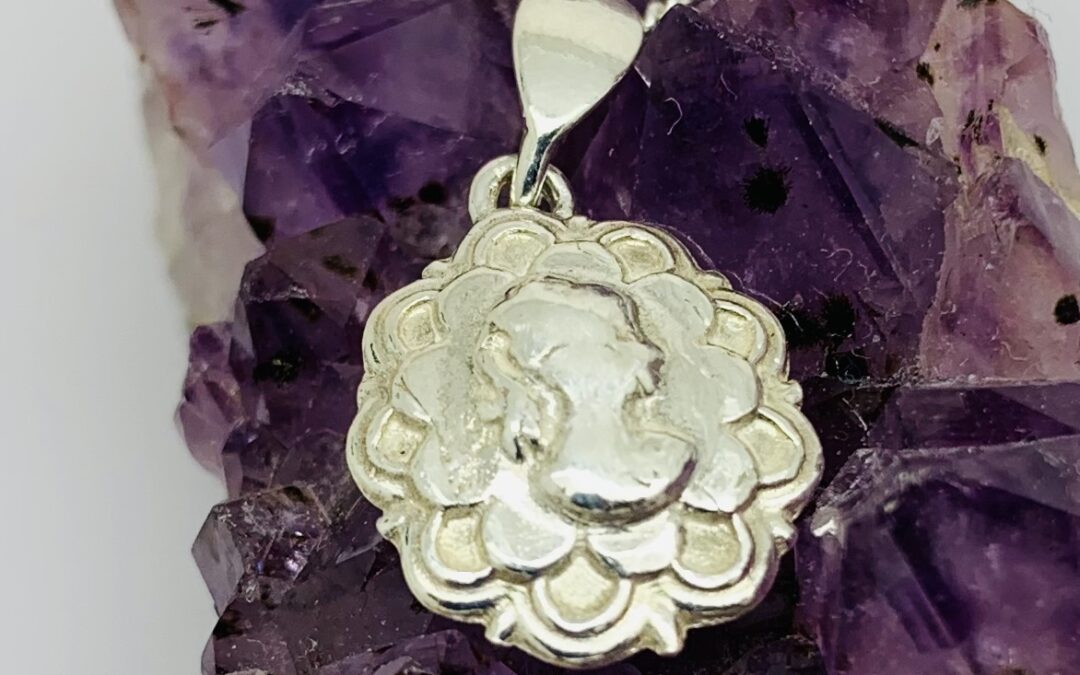 You may read that title and say “What?”

When working with Metal Clay, you need to apply some elbow grease to it.  And this is called burnishing.

I really love Cameos, so I thought I would try making one. There are also stud earrings 🙂

So What is Burnishing?

The simple answer is that it’s polishing by rubbing.  It also allows you to create contrast between shiny and satin finishes.

When rubbing I use one of these three burnishers pictured here.  They are made of stainless steel or agate.  I choose the one that will help me best to push the metal molecules together.

My goal is to push down the metal crystals  This pushes the molecules together which in turn creates a shine.

Remember how I said it takes elbow grease?  You actually have to rub the piece hard to make this work.  It takes time, but it’s worth it!

Two pictures of Cameo, Before and After Burnishing

Look at my two examples:  The first picture of the Cameo is after it came out of the kiln and was tumbled.  So some burnishing happened in the tumbler, but not enough.

The second picture is the same Cameo after I spent time burnishing it with the middle burnisher.

The hard part was so many crevices in the cameo.

I have such amazing and knowledgeable mentors in Metal Clay. So this time I turned to Hadar.

Hadar uses ice cubes to explain why this happens.

As we know, water freezes in the freezer, and melts at 32 degrees F.  The freezer however is colder than what it takes to freeze the water.  So if you were to put a bowl of ice cubes in the freezer the ice cubes would all freeze together into one solid unit.

This is because they would start to stick together.

However, since they don’t touch each other at every point on their surface, there are spaces between them.  Therefore, the mass is porous.

When this ice mass melts, it fills up all those spaces and becomes one again.

After I make something with Metal Clay, it needs to be bone dry until I can do anything else to it.  This picture shows you just how fragile it is in this stage.  The molecules are only just touching each other, but not securely.

Torch or Kiln Firings not in accordance with the Manufactures Specifications:

There are many things that could have gone wrong here, none of which I will go into here because the explanations would be lengthy and complicated.  But still, you can appreciate how the molecules are still partially touching each other.  Again, this makes the piece very fragile.  And honestly, this is not how we think of metals!

When all goes well with the time and temperature of the firing you get what you’re looking for in the molecules.  And you can see in this picture that the molecules are touching.

The pitfalls are scratches in the metal if I’m not really careful.  This means that I need to pay attention to the angle I apply to the metal when burnishing.  And of course, do more polishing!