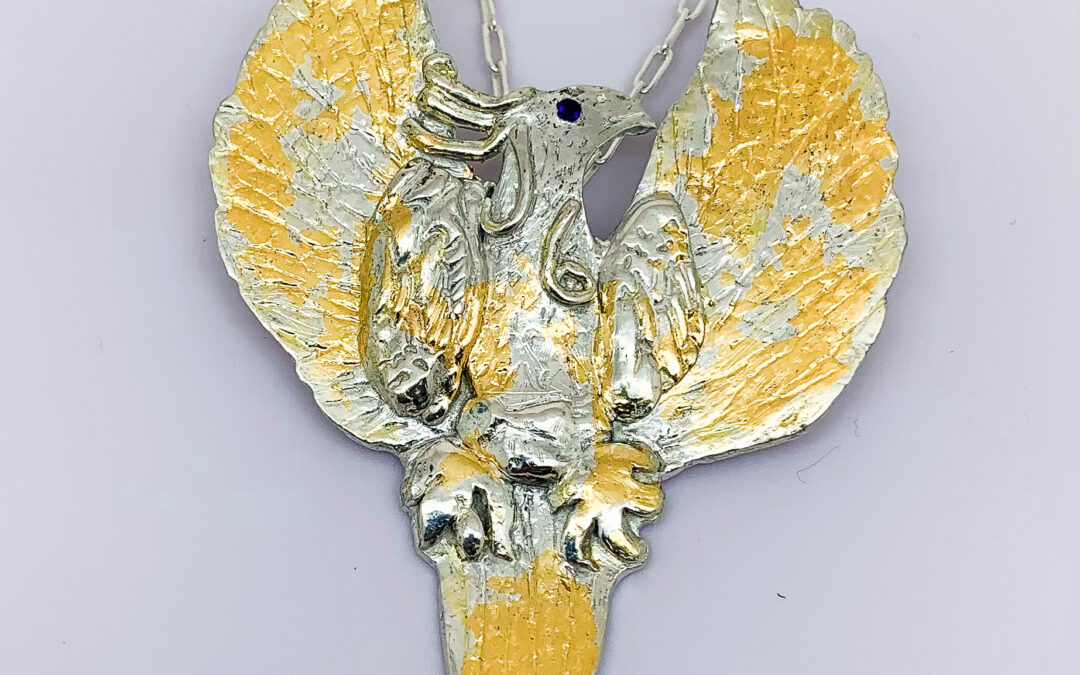 There always seems to be a story behind my jewelry pieces, and the Rising Phoenix is no exception.

I was listening to the CBC news when the newscaster used the words “rising phoenix” to describe the Ukrainians and their battle for freedom. Those words hit my ears and heart with force, and I knew I would be making a Phoenix. It was literally that fast!

My first step is always to begin drawing. But even before that, I went to ‘Google’ to look at paintings of Phoenix by other artists. After a thorough look, I began drawing.

Here are some drawings as I was honing in on the way I wanted her to look. To be honest, I did want her head pointed upwards, but I couldn’t seem to get the proportions the way I wanted. So as you can see, her head is towards her heart.

I asked many people about what color her eye should be. I started by suggesting a black diamond, ruby, and sapphire to get the conversation started. As it turned out, it was an overwhelming vote for a blue Sapphire.

She is made with Fine Silver (99.9% Silver) Metal Clay. I actually really love working with Metal Clay, and this gave me the opportunity to make the head and body, wings, tail feathers, and talons. Each piece was made and then put together.

Then the carving began to create the feathers.

I made the bail for the back so that it is hidden.

Metal Clay has to be either torched fired or put in a kiln to fire. She was way too big to ever consider torch firing. And to be honest, I love my kiln!

Now for the Fire

Well, you can’t have a Rising Phoenix without fire! I thought about making fire with metal clay, but I wanted to keep the weight down. So I tried painting on 23K Gold, but that didn’t work.

Then I decided to add 24K Gold with the ancient Korean technique, Kuem Boo. I actually added a lot of Gold to represent the fire. I wanted it to be random to reflect what fire can do as it dances around.

Kuem Boo is done on a hot plate while you burnish, or fuse, the Gold and the Silver together. I am so pleased with the results!

The burnishing continues with agate and stainless steel for quite a while to push those Silver molecules together. This is because the molecules with metal clay have not been compressed as sheet metal has been. So it’s all about elbow grease!

And, the elbow grease continues with the polishing. But it’s so worth every moment!

So what began as a political statement changed. When I looked at her, I thought that adding yellow and blue beads would be over the top.

But as I reflected, I thought of how each of us have our own issues from which arise. So she became more spiritual. For me it doesn’t take away from my feelings for what the Ukrainians are living through. The meaning for me just grew.