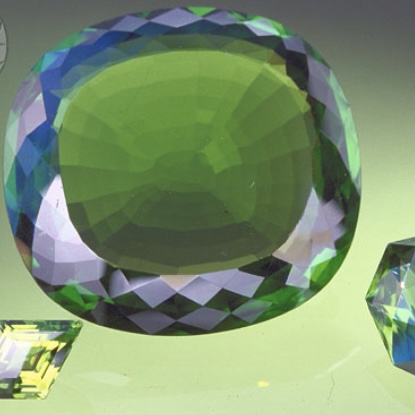 Peridot is a semi-prescious gemstone with a lovely green color.  The color can actually vary from a rich green to a pale yellow-green, to olive-green.  It all depends on how much magnesium there is.

Where does Peridot Come From?

Most of the peridot seen in jewelry today comes from China, Myanmar, Pakistan, Tanzania, Vietnam, and the United States. Some peridot journeyed to Earth on meteorites. Most peridot is formed deep in the earth. As a consequence of volcanoes, they come to the top of the earth’s surface.

The History of Peridot

The word peridot comes from the Arabic “fardat,” which means “gem”.

The ancient Egyptians mined peridot on the Red Sea island of Zabargad. This island was the source for many large fine peridots in the world’s museums. The Egyptians called peridot the “gem of the sun.”

The largest peridot in the world belongs to the Smithsonian National Museum of Natural History. It weighs an astonishing 311.8carats!

Gemstone of the Sun

The Egyptians called peridot the “gem of the sun.”

Peridot protects you from “terrors of the night.” The only condition is that it must be set in gold, and worn on the right hand.

However, others strung the gems on donkey hair and tied them around their left arms to ward off evil spirits.

Some historians believe that Cleopatra’s famous emerald collection might actually have been peridot. This is because people in medieval times continued to confuse peridot with emerald.

For centuries, people believed the fabulous 200-ct. gems adorning the shrine of the Three Holy Kings in Germany’s Cologne Cathedral were emeralds. They are peridots.

The official birthstone of August, Peridot. It offers many advantages to the wearer. The good news is that you don’t have to celebrate a birthday in August to benefit from its strengths. Peridot is for strength and balance. It brings peace, health, and rest because it harmonizes the mind and body. Peridot boosts creativity and improves your mood.

Peridot can bring out genuine love, bliss, and light.